And before I knew it I had entered the last week in China. If in the first two weeks of my stay I felt a bit bored or in need of some entertainment, the last weeks we had been invited to a lot of dinners, events, trips by half of the artists in the city and I had to pass on some of them. I had some works waiting that desperately needed to be finished.

The highlight of the residency, the ‘moment supreme’ that was ahead of me all this time was over in the blink of an eye. An opening event always holds an element of anti-climax for me. Weeks of mental preparation, hard work and last minute stress and within two hours it’s over. A lot of the good things in life are fleeting ones, or the other way around. 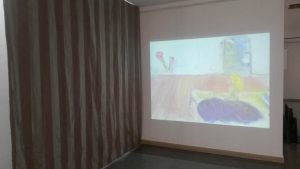 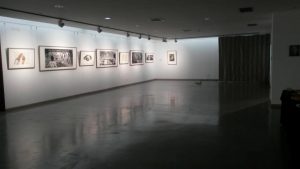 We arranged for our event to start at 15:00 on a sunday, uncommon here because most openings are held at 9:30 or 10:00. I am used to openings were the savory bite and – alcoholic  – drink is part of the deal, but on the table that they placed in the middle of the enormous exhibition hall there was a lot of fruit and cookies displayed and you could help yourself to some soft drinks. Most of it was carried away afterwards, because everyone was way too busy talking to be chewing. 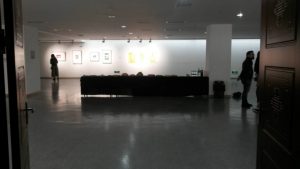 Cheng Liang and mr Wang sad some nice words about our work, at least that was what we heard afterwards, I could only catch our names, no matter how hard I tried. Apparently the title of my exhibition ‘China Dreams’ is almost identical to a slogan the communist party introduced a couple of years ago. ‘China dream’ had to be some kind of Chinese counterpart of the American dream. Jokingly Cheng told the audience that I understood politics in China very well, while I stood listening to him in front of my self declared very non-political work, oh irony… 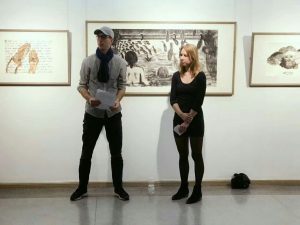 ‘We chat’, that we use instead of, well almost all western apps combined, proved itself a very versatile and reliable way of communicating because of all the people we met and invited through it a lot showed up. It was a nice crowd. And after the talks and our speeches I had to go be on pictures with people for what felt like half an hour. Every time I started a conversation I was suddenly dragged by my arm and placed right in front of my work for a series of pictures. I even had to sign some of my contact cards. It was very alienating but also very nice, this was our special moment and everybody in the room wanted to contribute to that feeling. A feeling I would not mind to bring back home to be honest. 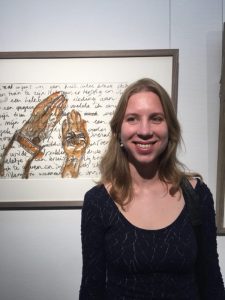 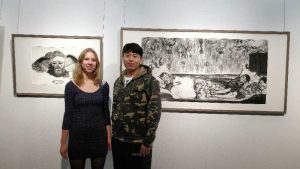 All in all it feels as if China is indeed some sort of post-modern US, I sense something like a fake till you make it mentality but also a lot is possible, you just shouldn’t be too modest or too hesitant. Last monday, having hardly slept away my hangover we went on a beautiful trip alongside the coast, right after we both gave a workshop to the fist year students of the polytechnical university. They’re in Bram’s English class, (one of the Dutch expats in Dalian we met through Renee, he’s her husband). I didn’t want to miss the opportunity to give a workshop to Chinese students so I came up with a concept. But it it not that simple to tell a group of barely English speaking students that they have to split in groups to make a stop-motion together, cause that was what I had in mind. But some of them really worked good and came up with nice little stories. I still have to see the results but I am really curious how they turned out, I have my hopes up.

And I found out it’s really nice to have a group of people listening to you and learn and execute something you suggested, who knew.

The last weeks have been one big stream of new things anyway, of first times. And this is very inspiring and exhilarating. So many people who work here have told me that six weeks is a very short time to work here, that it is not enough to really get to know the place. That is very true, it’s more like dipping your toe in the water than swimming in the sea. But this tip toeing works all too well to evoke a certain mood. It gave new energy, and for me it definitely tastes like more.

Posted on November 6th, by Marlies in Blog.
Comments Off on Peaks