It could be considered something close to a miracle that I can write this blog for you from Dalian, because only due to some huge luck I didn’t loose all the things one usually needs when going abroad. It starter quite relaxed on friday, I packed everything perfectly on time the night before, in the morning I was preparing the last things and then my mother drove me to the train station. Almost there, in the line for a traffic light the car behind us honked a couple of times, “what does he want” I thought grumpily, when a man in a wedding suit, flower in his pocket and all the works, stepped out of the car and walked towards the drivers seat. Through the opened window a hand came and a voice said briskly “your phone”, while handing over the rectangular giraffe print cover that contained my samsung, which I never even missed a second. I felt the blood draining from my face in a hindsight panic wave. Confused of what happened – it couldn’t have felt out of the car, the car is clósed! While searching at holes in the car – I started waving frantically at the guy, gesturing thank you sings. I decided to not think about my it anymore when I went into the train, Schiphol was a two hours long, straight line of window staring and reading.

Maarten and I were extremely on time – he hopped on in Hengelo – took the plain, and after the smoothest flight I ever experienced landed in Beijing. Only getting out and changing planes was a challenge, we stumbled into the arrival hall like two zombies, all I wanted to do was lie on the ground and sleep. Instead we had to wait for three and a half hours for our flight to Dalian, and when we were on that plane I felt like I could finally relax. I even fell asleep, and when we landed after what seemed ten minutes I walked towards our luggage totally drowsy. We stepped into the hall where an enthusiastically waving woman – which was Vivian, our help and support at the museum – was waiting for us behind the last check of the tickets. The ticket, where was my ticket? I had put my ticket and passport and some other papers conveniently together in a little travel sleeve, because it made it a lot easier to go through the endless number of checks we encountered. Now I remembered that in the plane I had put it in the chair in front of me, because I was afraid it would fall on the ground. And now it was still stuck in the back of chair 52k. For the second time in a day I felt a wave of panic rising, I ran back to the gate, a man shouted something after me, I gestured back and could go. Taking three steps at the time I came upstairs and found all doors of the gate closed. I tried to open them but they were locked. I started waving and making hand gestures to some waiting passengers, and after a while a Chinese stewardess came and opened the door. She barely opened when I tried to say as calm but clear as possible that my passport was still on the plane. ‘Your ticket please’, she said firmly, ‘its on the plane, it’s all still on the plane..!’ I said, now panick started to show a bit. I was thinking if it was possible that the plane had left, but it was not even twenty minutes after landing, it had to be there..She looked at me and gestured me to come in, I thought I saw a trace of carefully hidden disdain on her face when she walked me all the way back to the right plane – ‘Beijing to Dalian.!! And it landed at half past one!!’ – and all the way back into the cabin, were the crew was busy cleaning up. ‘Which seat’, and when she walked up there I smiled to everyone around me, hoping it would help in some way. When I saw her grabbing the light blue sleeve I felt a little jolt of happiness, and while she carefully checked what was in it and if it looked like my picture in the passport, she walked back and handed it to me. Thanking everybody around me a hundred times I walked all the way back to the hall, where a laughing Vivian took us to a taxi that drove us to the Zhongshan Museum. ‘How much luck would I have left now?’ I thought while looking out of the window onto the busy street, where honking cars and numerous flickering Chinese signs were fighting for attention. 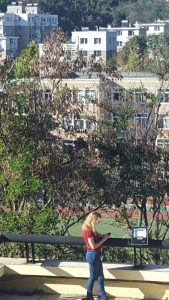 The Zhongshan museum appeared to be on the edge of the city, surrounded by trees, which I found very surprising, having imagined it on a busy city square. Our studio, a large stretched room, came with a view on five or six hilltops, which surprised me even more and pleasantly. The sun was shining and gave everything, from the beige/brown stones of the buildings, to the trees on the hills and the electrical wires in between the buildings, a mediterranean glow. This impression would only get stronger the following days. 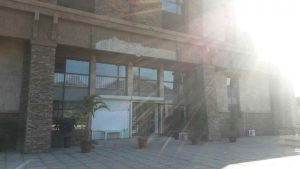 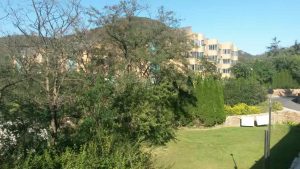 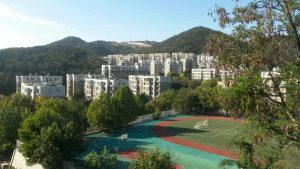 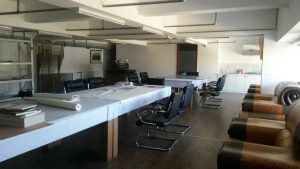 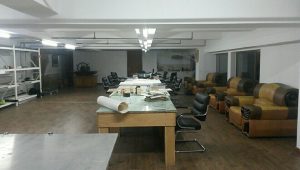 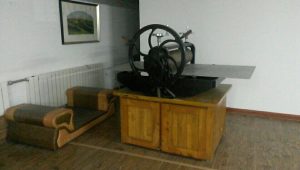 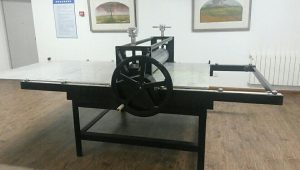 After an hour in the bright sun – no, I was definitely not in the Netherlands – Vivian gave us a tour through the museum. There was a show on display about Russian paintings, and indeed walking into the large room being followed by the ligths, I felt like I went back in time. Everywhere I saw painterly depictions of Lenin orating to groups of workers, who were all listening carefully, or peasants and workmen in the midst of their duty. ‘Because China and Russia have a special bond’, as was explained to us. Further clarification we didn’t get and the smeary colored paintings made me suddenly long to see the paintings from Turner, that I saw last year. ‘The sun is god’ I remembered his one-liner while imagining the bright depictions, not this soulless political sadness, for what its worth. We soon had to cut off the tour and go, because we had to have dinner and then we had plans for the evening, so we went back to the centre of Dalian. At the top-floor of a shopping mall there was a nice restaurant, – apparently this is where they often hide in China – were we enjoyed some Hongkong based food and could practice eating with chopsticks, very tricky with slippery noodles, but I managed.

After dinner we went to the ‘Dalian international garments and textile fair’, a fashion event. We arrived at an enormous factory hall like space, where Designer Hellen van Rees – working in Enschede – had a solo show. We were placed on the VIP seats, facing the end of the runway. Lights were dimmed, rays of laser light made a pattern that reflected on the shiny black runway as if it was an elongated pool, and music started. Western and Asian looking girls in textile walked towards me in various creatively draped textile creations. Lots of streaks and white. Later more shimmering materials, black and sculptural shapes were presented. I always like to see designers that don’t use fur or excessive amounts of leather, so that was good to see. But some of the girls were unpleasantly skinny, I was surprised some of them could stay up straight. And I thought that the fashion world of today really isn’t my thing.
As sudden as it started the show was over, and we stayed a bit talking to Renee, – who’s Dutch and mediates between sister cities Enschede and Dalian, so there’s actually a whole flock of Dutchies here – after which we called it a night and took a taxi back to the museum. Not being able to do much I let myself fall in one of the huge fauteuils in the studio and closed my eyes, and thought to myself ‘Fuck I am really in China!!’ 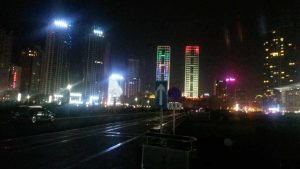 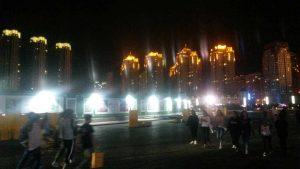 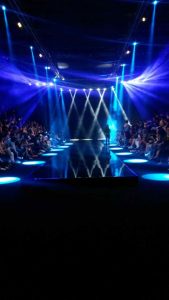 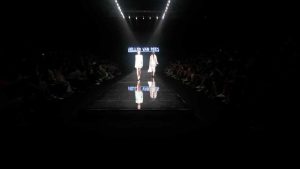 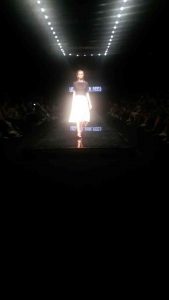 Posted on September 27th, by Marlies in Blog, Uncategorized.
Comments Off on Traveling day – Arrival in Dalian