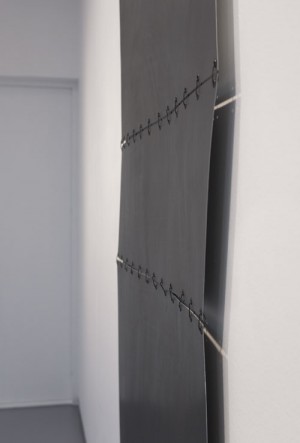 The exhibition of new works on paper created during her stay. Using the traditional tools of drawing Karlsson makes works that function as objects rather than image. Works that exist in the meeting point between drawing and sculpture.

By focussing on the material itself and leating it discripe weight, mass, volume and gravity, the paper and graphite is freed from its representative and dipicting attachment to reality.
Karlsson creates works that could be seen as flat sculptures or three dimensional drawinings.

Karin Karlsson (b. 1984) lives and works in Stockholm, Sweden. She received her MFA from the Royal Institute of Art in Stockholm in 2011.

Posted on November 27th, by Marlies in 2013, Artists, Artists who resided at the studios.
Comments Off on Karin Karlsson